Contact Improvisation is the simultaneous exploration of, experimentation with, and execution of physical and perceptual attention to the location, duration, and operation of one or more touching or potentially touching surfaces between two or more bodies.

“The meaning for me is the truth involved in this: one artist creating spontaneously something which is governed by the atmosphere, the audience, the place (both the room  and the geographical location), the instrument; all these being channeled consciously through the artist so that everyone’s efforts are rewarded, although the success or failure belongs completely to the artist himself.  The artist is responsible for every second.

In a group this is not true, nor should it be true.  One is firstly responsible to the other players and so the cycle is not quite complete, not quite pure.  Nobody knows exactly whose fault or responsibility, failure, or success it is because of the nature of a group and the complexities involved.  One does not have the communion with the audience because one is having communion with the rest of the group.” – Keith Jarrett, from the liner notes for Solo-Concerts Bremen Lausanne

Today I bought Keith Jarrett’s Solo-Concerts Bremen Lausanne CD.  I don’t know much about his music, haven’t heard much of it.  I listened to a story a few days ago on, I think, NPR about the album of his solo concert in Cologne and then walked by the Dussmann shop on Friedrichstrasse and saw several of his albums for sale.  Couldn’t find the Köln one, so I bought this one.  Listening to it right now, the part from Lausanne.  Around 23:00 some great music happens and continues to about 29:00.  A wonderful vein that he explores.

I really like some things he says in the above quote –

What I like the most is the word consciously.  Too often, I think, people associate spontaneous and improvised with unconscious.  I have no interest in watching someone who is unconscious.

What cycle is Jarrett talking about in the second paragraph?  Is he referring to the cycle of atmosphere, audience, etc. affecting the artist who is then in turn affecting the atmosphere, audience, etc which then in turn affect the artist which then in turn…?  So then does the group or ensemble communion affect connection to the audience?  I would agree, and maybe this is why ensemble improvisation can seem insular or self indulgent because the artists are paying more attention to each other than to the audience.  Hmm…, but I am speaking from a dance artist’s perspective and not a music artist’s perspective.

Whatever he means, I’m going to listen to more of his music.

The third iteration of ***** Hotel will be appearing in a couple weeks, at the GOlive Festival in London.

Sadly only four of the stars will be able to make it.  Down 20% from the inaugural performance, but up 33% from the second performance.

I am interested to see how this latest constellation will perform.  Again with a live musician, this time a percussionist.  The first iteration had a musician who, if my memory serves me, was a bassist who used a kettle drum, a piano and a variety of small hand held instruments.  The musician for the second performance is a cellist, Barnaby Tree.  What intrigues me is the concept of melding rehearsal with performance.  As the members of 5***** Hotel live in four different cities, they are not able to rehearse in the traditional sense.  This geographic variation forces the group to rehearse in front of an audience.

When I performed with Nancy S. Smith, in 2008 I think it was, at SFDI, she told me of a rehearsal process with a group of experienced performers.  They had agreed upon a score, which during the performance they all abandoned.  Granted a score can be abandoned and everything is fine, but then there’s abandoned.  Some performers ended up in the audience, some were singing.  This is not to say that the performance was “good” or not, but I am relating this anecdote to illustrate the fact that when the lights go up and there’s an audience, plans and people change.

With the group ***** Hotel, because there is no rehearsal, there is no possibility of deviation.  Personalities and plans can’t change from the studio time to the stage time.  For me, if we are to use the three stages of creation to define an improvisation, this method of performance making is even closer to an improvised performance.

The moments of execution during the GOlive festival will be very close temporally to the moments of experimentation.  The exploration stage has already been completed as the personnel, the location, the time of the performance, the costumes, etc., and the concept (open spontaneously composed performance) have already been determined.  Looking more closely into the stage of execution, i.e., the performance, what will happen in front of the audience has yet to be determined.  So within the execution stage, the three stages of creation as they relate to the performance, will be constantly evolving and informing each other.

There are three stages of conscious creation, though unconsciousness can factor into them.

They are exploration, experimentation, and execution.

I had a good description of the three written down in a notebook during a caffeine fueled frenzy after a Klein technique class at Labor Gras, but, alas, that notebook is AWOL. Here is a link to an earlier posting on the subject from ’08

Their4, I will begin again.

Exploration is the first stage. It is search before the research. It is the hearsal before the rehearsal. It is the discovery of what exists around you, whether you are in the studio or sitting on the subway thinking about your project. It is discovery/invention of what tools you will be using in your project. Also exploration is the rejection of tools. A work of art is more about what it is not than what it is. Granted all types of infinities exist some are just larger than others.

Experimentation is the second stage. Once the tools have been selected/created, their relationships can be investigated. (Uh oh, passive voice) How do the tools interact? Are you using them as tools or have they become logics or aesthetics? Experimentation is also the stage in which you can begin to figure out more in what direction your project will go.

The final stage is execution – when the work is presented before an audience.

I would say that in the choreo/impro spectrum the size of the triangle is larger towards the choreo end and approaches a dot towards the impro end. But choreo could be made as something to experiment with during the execution phase, the logic of that piece then being more improvisational.

All three phases can happen at the same time or separately. In more traditional (choreo’ed) work, there is more linear progression from exploration to experimentation to execution.

Below are two pictographs about this triumvirate. One has the three on a Cartesian co-ordinate system and the other as a simple triangle, which can be mapped on to the co-ordinate system. I find that the co-ordinate system can be a little misleading as it implies a “0” in relation to the three elements, which as I think about it now does make sense, so maybe it is not so confusing. A work of art that has no exploration, no experimentation and no execution would be not. What would something that has an infinite amount of each? 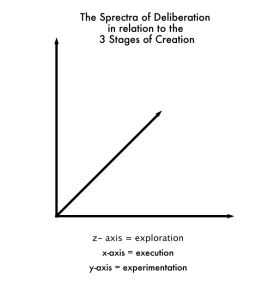 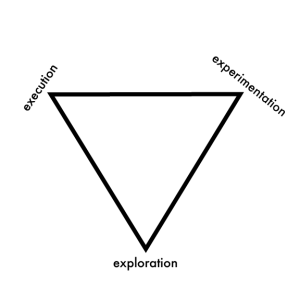 I appreciate any thoughts and feedback on this subject.